After one of the best, well-kept, surprise endings in cinema history was so rudely ruined for me, Fight Club swiftly moved to the top of my “Movies I Should Be Ashamed That I Haven’t Seen Yet” list.

Twenty years later, I finally sat down to watch this film and was impressed, repulsed and completely mesmerized by the characters and events unfolding in front of me. Edward Norton as an apathetic insomniac, Brad Pitt commanding the screen (and SPOILER ALERT: Edward Norton’s character) in every scene, and Helena Bonham Carter playing, well…another version of every character she has ever played. With that type of deadly combination, I’m shocked it took me this long to see it.

We all know how incredibily stylistic, well-written and captivating Fight Club is so instead of a review, I wanted to share some interesting facts and “Easter Eggs” I learned after watching this film.

If you’re looking for him, try not to blink – He only appears for 1/24ths of a second.

2. When Norton’s character punches Brad Pitt in the ear, that was Pitt’s real reaction.

“You punched me in the ear?!” Well, Norton was suppose to punch Pitt on the shoulder but before they started shooting this scene, director David Fincher told Norton to punch him in the ear instead. Pitt’s reaction of genuine shock and pain makes the scene even more great.

3. Supposedly, there is at least one Starbucks cup in every scene in the movie.

Now, THAT is what I call product placement.

4. Throughout the film, Norton gets visibly weaker and thinner, while Pitt’s character gets noticeably stronger. 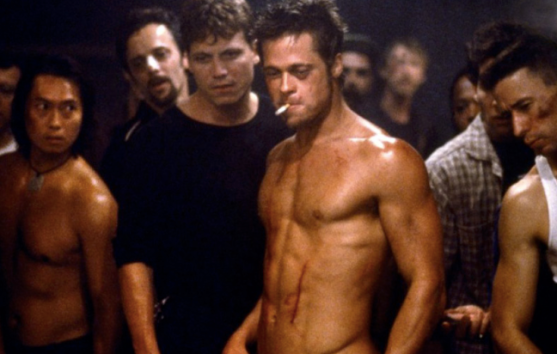 This switch-in-work-out-regimens was done intentionally to show the audience that Norton was losing the battle with his inner demons as they took control (a.k.a Pitt taking over).

5. In the scene where Pitt and Norton are drunkenly hitting golf balls, they were actually drunk and the golf balls were hitting the catering truck on set.

I know the #1 rule of Fight Club is not to talk about Fight Club… But if you feel like breaking the rules, let me know what you thought of the twist ending in the comments below!